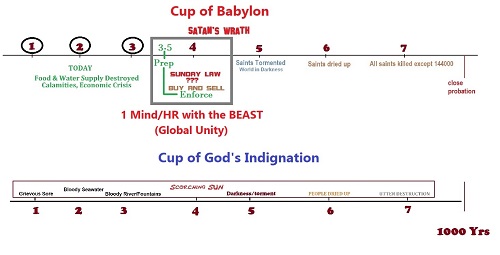 Jeremiah 51:7 Babylon [hath been] a golden cup in the LORD'S hand, that made all the earth drunken: the nations have drunken of her wine; therefore the nations are mad.
51:8    Babylon is suddenly fallen and destroyed: howl for her; take balm for her pain, if so be she may be healed.
51:9    We would have healed Babylon, but she is not healed: forsake her, and let us go every one into his own country: for her judgment reacheth unto heaven, and is lifted up [even] to the skies.

Rev 18:5, 6, 8 For her sins have reached unto heaven, and God hath remembered her iniquities.  Reward her even as she rewarded you, and double unto her double according to her works: in the cup which she hath filled fill to her double.  Therefore shall her plagues come in one day, death, and mourning, and famine; and she shall be utterly burned with fire: for strong [is] the Lord God who judgeth her.

Rev 16:19 And the great city was divided into three parts, and the cities of the nations fell: and great Babylon came in remembrance before God, to give unto her the cup of the wine of the fierceness of his wrath.

middle voice of a derivative of 3306 or perhaps of the base of 3145 (through the idea of fixture in the mind or of mental grasp); to bear in mind, i.e. recollect; by implication, to reward or punish:--be mindful,

Laodicean churches saying the wicked are able to unite in the 6th plague even when God is pouring out His cup of indignation as remembrance of what Babylon did before probation closes.

"The enemy of souls has sought to bring in the supposition that a great reformation was to take place among Seventh-day Adventists, and that this reformation would consist in giving up the doctrines which stand as the pillars of our faith, and engaging in a process of reorganization. Were this reformation to take place, what would result? The principles of truth that God in His wisdom has given to the remnant church, would be discarded. Our religion would be changed. The fundamental principles that have sustained the work for the last fifty years would be accounted as error. A new organization would be established. Books of a new order would be written. A system of intellectual philosophy would be introduced." - Early Writings  pg. 270 par.2}

Jesuits were alreadys surrounding EGW even when she was still alive.

Revelation 6:15           And the kings of the earth, and the great men, and the rich men, and the chief captains, and the mighty men, and every bondman, and every free man, hid themselves in the dens and in the rocks of the mountains;
6:16    And said to the mountains and rocks, Fall on us, and hide us from the face of him that sitteth on the throne, and from the wrath of the Lamb:
6:17    For the great day of his wrath is come; and who shall be able to stand?
Rev  14:18       And another angel came out from the altar, which had power over fire; and cried with a loud cry to him that had the sharp sickle, saying, Thrust in thy sharp sickle, and gather the clusters of the vine of the earth; for her grapes are fully ripe.

14:19  And the angel thrust in his sickle into the earth, and gathered the vine of the earth, and cast [it] into the great winepress of the wrath of God.
14:20  And the winepress was trodden without the city, and blood came out of the winepress, even unto the horse bridles, by the space of a thousand [and] six hundred furlongs.

Reward her double:
Obadiah  1:15  For the day of the LORD [is] near upon all the heathen: as thou hast done, it shall be done unto thee: thy reward shall return upon thine own head.

Isaiah  59:18    According to [their] deeds, accordingly he will repay, fury to his adversaries, recompense to his enemies; to the islands he will repay recompense.

Revelation 18:6           Reward her even as she rewarded you, and double unto her double according to her works: in the cup which she hath filled fill to her double.

Links to Headlines:
Fed to kick off climate scenario analysis in 2023 with six large banks